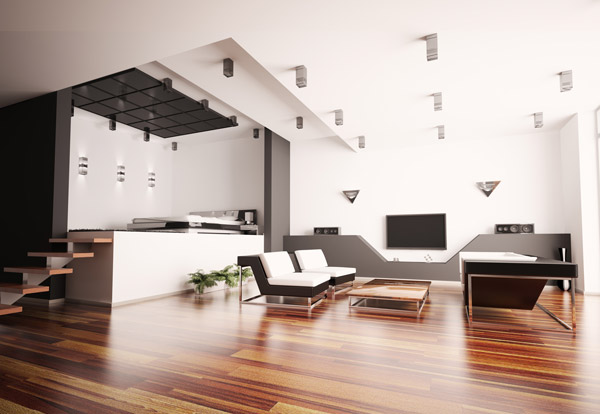 Modernism was all about a rejection of traditional art forms such as Victorian and Gothic designs, as it wanted to move beyond many of the limitations imposed by such styles. The goal of modernism was freedom of expression, which can be seen in a general sense in the distinction between, say, Michelangelo and Pablo Picasso. The former focused on realism and an exact representation of things in nature, whereas the latter explored more abstract forms and shapes, throwing off conventional rules.

Modern interior design does much the same thing, while also retaining some hard and fast rules of its own. Rather than focusing on gaudy and ornate decor or a sense of overall pageantry that’s found in traditional design, modern design focuses on a stripped down, straightforward, and informal approach.

The stained woods, rounded curves, and rich colors of traditional design are replaced with metal, plastic, neutral colors, and straight lines. Overall, modern interior design is about getting down to the basics and deemphasizing pageantry and unnecessary detail.

Modern design is also significant because it has given birth to the following forms of design.

In many ways, this can be seen as the ultimate logical conclusion of modern interior design. As the name implies, minimalism is all about stripping things down to their bare bone essentials, clearing up as much space as possible and emphasizing the underlying function of home decor and devices.

That said, minimalism can also be stylish, achieving a sense of decor through the mere spatial relationships between objects. There is also plenty of room for creativity, and there are many examples of minimalist designs, all of which are unique in their own way.

Minimalism isn’t so much about “less”, as it is about doing more, with less.

Minimalist interior design is about closing the gap between form and function as much as possible. The overall sense that minimalist design is supposed to give is one of streamlined efficiency and fluidity, creating a kind of peaceful emptiness to any given room.

As with modern design, the color pallet of minimalism is as simple and straightforward as possible:

And sometimes, the occasional primary color, just to mix things up a bit. This leads us into our next dominant aspect of minimalism:

Modern interior design leaves no middle ground between rooms, spaces, or objects. There’s rarely any question as to when one area begins or ends. For instance, the walls in any given room may be painted in completely different colors – one white, one black, another blue. Tables will be mere flat squares on a few skinny legs. Faucets will be a single functional shape standing atop a basic square, stainless steel sink. The kitchen cabinet won’t have any gaudy or unnecessarily large frames, and inside you’ll find a line of identical cups found in only a few different colors.

In the middle of a room, you might find a chair, painting, or rug comprised of a color that makes it pop out from its surrounding objects.

Further adding to the sense of clear distinction, minimalism incorporates multifarious materials, increasing the contrast between one object/area and another.

Many forms of interior design make use of various colors, woods, and fabrics for ornamentation, whereas minimalism does so through the spatial relationship of the angles of different objects, and the negative space between them. As with the few stark color distinctions listed above, minimalism will often include “stand out” pieces of furniture that serve as the focal point of a room.

This is an aesthetic that has really caught on in suburban areas and large cities. The reason being is that it’s all about incorporating the interior structure of the building itself as part of the interior decor. This is an obvious form of brutalism that people are either going to love or hate.

Industrial design makes decor out of:

That said, industrial design is also painstakingly thought out. The materials involved in these objects is very high in quality, and the products are all crafted professionally. In this way, it seeks to create a form of interior design that is both human and machine-like at the same time, making it a predominantly masculine style.

As with minimalist design, industrial is about combining form and function as much as possible.

When it comes to furniture, this is usually where a huge balance is made. Industrial design often makes use warm, cozy beds, plush couches with lots of cushions, warm rugs, and bean bags. Industrial design also makes liberal use of plants to balance out the factory-like atmosphere with something living, making the style feel ultimately more human.

In the end, if you prefer lush, rich colors and fabrics, industrial design isn’t for you. But if you enjoy the brutalist aesthetic, you probably won’t be able to live without it.